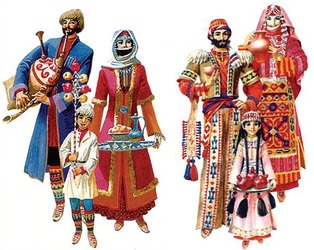 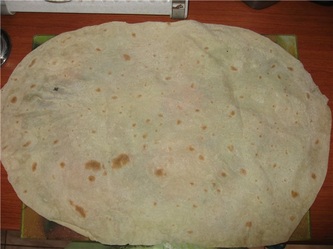 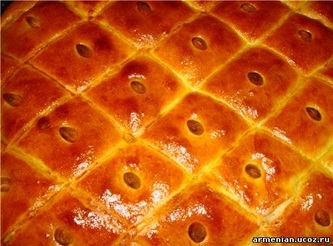 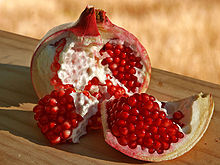 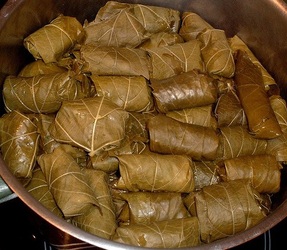 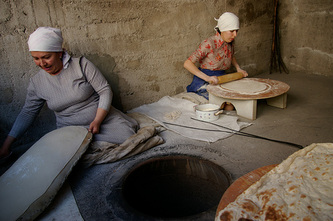 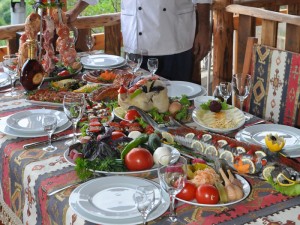 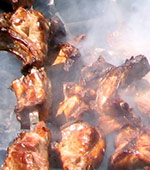 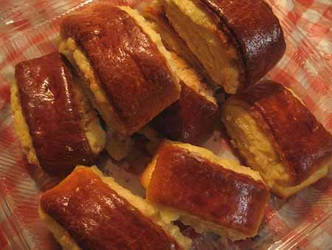 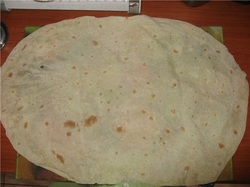 Lavash (Armenian: լավաշ, Turkish and Azeri: lavaş, Georgian: ლავაში lavaši, Kurdish: Lawaş لاواش, Persian: لَواش‎, lavāš) is a soft, thin flatbread popular in several countries of the northern parts of the Middle-East and the southern parts of the Caucasus.
Traditionally the dough is rolled out flat and slapped against the hot walls of a clay oven. While quite flexible when fresh, lavash dries out quickly and becomes brittle and hard. The soft form is easier to use when making wrap sandwiches; however, the dry form can be used for long-term storage (almost one year) and is used instead of leavened bread in Eucharist traditions by the Armenian Apostolic Church. In villages in Armenia, the dried lavash is stacked high in layers to be used later, and when the time comes to rehydrate the bread, it is sprinkled with water to make it softer again. In its dry form, left-over lavash is used in Iran to make quick meals after being rehydrated with water, butter and cheese. In Armenia the dried bread is broken up into Khash. Fresh lavash is also used with kebabs to make dürüm wraps or in Armenia to make burum which are wraps with herbs and cheese. According to the Encyclopedia International, "Common to all Armenians is their traditional unleavened bread, lav-ash, which is a staple in the Armenian diet."[1]

Lavash is made with flour, water, and salt. The thickness of the bread varies and depends on how thin it's rolled out. Toasted sesame seeds and/or poppy seeds can be sprinkled on before baking.

It is the most widespread type of bread in Armenia, Azerbaijan and Iran.[2]

It is also known in English as lahvash or cracker bread. 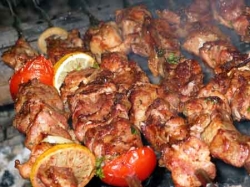 One of the most popular and favorite national dishes is KHOROVATS /in Armenian/, some sort of barbeque. KHOROVATS is mainly prepared on some special occasion, with a group of noisy and cheerful friends and a good master who will be entrusted the preparation of the meat and fire, moreover, this Armenian party will never do without a talking point.

Every year a festival of KHOROVATS is organized in Armenia, where the masters and experts of khorovats gather, at the green slopes of mountains, to compete in mastery of this “meat masterpiece”.

Another favorite Armenian dish is called “Khash” (word by word “Broth”), which Armenians started to cook in the ancient times before the birth of Christ. Armenians eat Khash early in the morning and it requires a strict compliance to the rules of this meal: no women, spoons, cognac or toasts at the table. To tell the truth, today the first point of the “Khash code” is not being applied, but all the other ones are actual up to date. 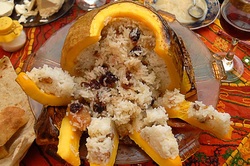 Ghapama is a festive pilaf which even has its own song. A pumpkin filled with rice, dried apricots, nuts, raisins is put into «tonir» (a national stove) and cooked. Ghapama is mostly preferred on holidays, particularly on Easter and on this day the number of black raisins in it symbolizes the quantity of truly faithful people who will be saved on the Great Tribunal Day. Tolma is certainly the queen of the Armenian cuisine. The Armenian women cook various versions of this ancient dish, however, the most favorite ones are the summer tolma and tolma with grape leaves (in ancient Armenian “TOLI” means grapevine). Our travel agency offers a range of activities to all tourists who wish to discover the secrets of Armenian cuisine. We will advise restaurants and eating-houses, organize special excursions to wine and cognac cellars for you. And for the amateurs of cooking we are ready to organize master trainings. 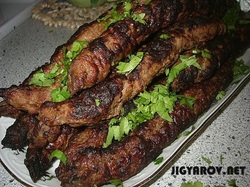